Netflix unauthorized Finnish translations without permission – “This is stealing the thief” 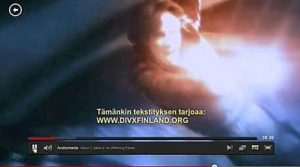 Online TV Giant Netflix was caught with unauthorized use of subtitles with his pants down, when the Finnish users began to use the service on Thursday. At the beginning of shipments into Finnish by Finland appears in the DivX, which is the movies and television series Finnish buff-turning fun online community.

DivX Finland share tekstityksiään online for free, but according to the site conditions of the license to use the texts for commercial purposes is prohibited.

– Oops. 🙂 It is nice that the texts are accepted, but could not even ask for permission. with Netflix tomorrow probably a fun conversation. :), Hakala wrote on Thursday night DivX Finland’s Facebook page.

– Mainly this seems amused. Not so this fit the attitude towards. We would have given permission if it would be well sought after. Neflixkin would be able to escape from this hassle, Hakala says Ilta-Sanomat.

– But after all, many [in our community] feel bad born after this, however, is moving money. Someone has cashed in a free work and claim it as their own, Hakala says.

Copyright Information and Control Executive Director Antti Kotilainen according to it can be said that in this case it is stolen the thief. Publication of the subtitles Legally enthusiast efforts made for non-commercial use is not legal according to Kotilasen, and DivX Finland has no rights to translation.

– It is clear that the DivX Finland’s activity is illegal. Netflix activities, in turn, define the agreements that they have [programs] with rights holders have done, says Kotilainen Ilta-Sanomat.

Kotilainen, the subtitles do not change back into regular, even if the broadcasting rights from the owner of Netflix took to them.

Kotilainen says that copyright law allows the translations to be carried for personal use, as well as receipt and transfer of a copy of the inner circle of a few, but not in an open online distribution.

– The translation is the author’s point of view, the legal copy. If you put them nettivivulle, a license is needed the owner’s rights.

Finnish representative Netflix has announced commented on the matter soon.

American Neflix transmit movies, TV series and documentaries via the internet for a monthly fee of EUR 7.99. It has over 27 million customers on three continents.