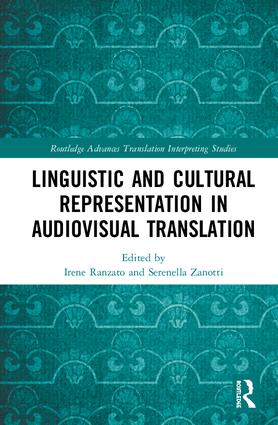 Introduction: If you can’t see it, you can’t be it: linguistic and cultural representation in audiovisual translation Irene Ranzato and Serenella Zanotti

4. “Free Free … Set them Free”: What Deconstraining Subtitles Can Do for AVT David Katan

5. Comedy Under Fire: Subtitling Two and a Half Men Into Arabic Amer Al-Adwan and Rashid Yahiaoui

7. Migrants in Translation: A Corpus-based Approach to the Representation of Migrants by Four News Broadcasting Channels Gaia Aragrande

8. The Representation of Foreign Speakers in TV Series: Ideological Influence of the Linguacultural Background on Source and Target Scripts Pietro Luigi Iaia

10.A Game of Languages: The Use of Subtitles for Invented Languages in Game of Thrones Sofia Iberg

12.Representations of Stuttering in Subtitling: A View from a Corpus of English Language Films Silvia Bruti and Serenella Zanotti

Irene Ranzato is a researcher in English language and translation at Sapienza University of Rome, Italy. Her previous publications include Translating Culture Specific References on Television (2015).