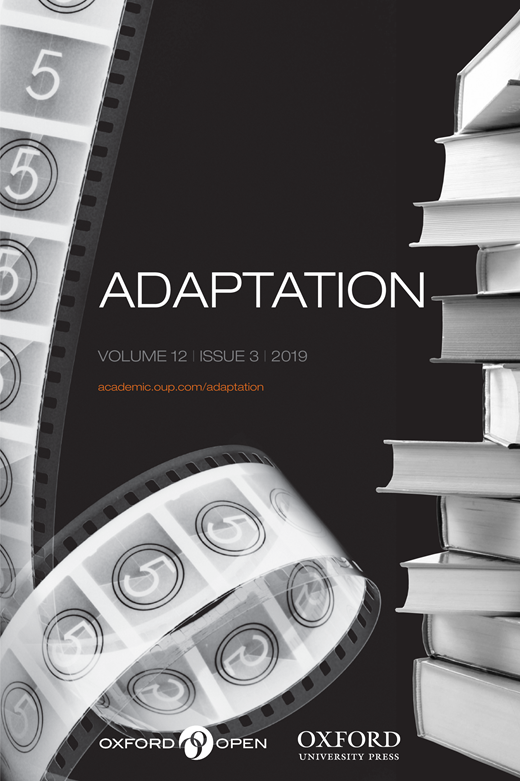 Introduction: Intersemiotic Translation as Adaptation: In Memoriam of Laurence Raw

Definitional issues are not new in translation and adaptation studies (TS and AS, respectively), and neither is the question of whether AS and TS should be seen as one discipline studying one object of study or rather as two disciplines studying two distinct sets of phenomena. This paper argues that an interdisciplinary view on the subject may offer some analytical tools that help advance this discussion. Since the issue is in part one of definition, Section one looks into theories of definitions and discusses four types of definition that could be of use to our debate. This leads to the paradoxical conclusion that to define translations and adaptations is at once easy and difficult. Words like ‘adaptation’ or ‘translation’ are common nouns, which point to sets of entities that share nonunique features. Hence to name is to categorize. Section two probes into theories of categorization and how they could help categorize translational and adaptational phenomena. It turns out that a study of categories and categorizing must involve categorizers. Consequently, one may study science as an epistemic practice, but also as a social one. This introduces section three, which looks into the emerging discipline of interdisciplinarity studies, that is, the study of the compartmentalization (e.g., disciplinarization) of academic knowledge. The conclusion that follows suggests that perhaps, instead of trying to absorb each other, AS and TS should consider themselves rather as siblings, that is, members of a larger family called intertextuality or influence studies.

Nicola Dusi
This article seeks to find a balance between issues concerning adaptation and translation and issues of TV studies and film studies. Adapting a literary text for a movie or for a TV series within the same culture involves a plethora of interpretive, semiotic, and hermeneutic relationships. This case study of the Italian novel Gomorrah (2006) by Roberto Saviano considers diverse strategies of adaptation, illustrating the complex passage through different discourses, practices, and processes from Saviano’s novel to Matteo Garrone’s film (Gomorrah, 2008) and to the TV series (Gomorrah, 2014—on air). The analysis adopts a multidisciplinary methodology in order to draw attention to translational ‘continuities’ from one medium to another and to the differences and ‘discontinuities’ in transmedia reinterpretations of previous source materials.

Translation and Adaptation as Recontextualization: The Case of The Snowman

Annjo K Greenall, Eli Løfaldli
In this article, we propose an integrated framework especially, but not exclusively, tailored to the analysis of multisemiotic transfers/transformations that involve both linguistic and non-linguistic elements. The framework is based on the Swedish communication scholar Per Linell’s notion of recontextualization. This concept, which denotes the process of inserting an element from one context into another, thereby effecting some kind of transformation, is theoretically prior to both of the concepts ‘adaptation’ and ‘translation’ as they are prototypically understood, and encompasses them. Thus, taking this concept as a point of departure allows us to avoid artificial boundaries between that which is commonly considered to be adaptation-studies concerns, and that which is considered to be translation-studies concerns, in analyses of multisemiotic transfers/transformations such as film adaptations. By introducing a flexible set of ‘levels’ of recontextualization (medial, generic, cultural, ideological, and linguistic) and deploying them in a sample analysis of the immediate critical reception of Tomas Alfredson’s international reworking of Jo Nesbø’s The Snowman, we show how these levels work together to create various interpretative possibilities and effects for viewers. Finally, we argue that an integrated framework based around the notion of recontextualization will also be applicable in analyses of non-translation/non-adaptation texts, allowing comparisons of recontextualization phenomena across communicative forms.

Building mostly on the seminal works of André Lefevere and Bassnett, recent work carried out in translation studies has problematized extant conceptions of translation and the distinction between various forms of creative rewritings. Similarly, individual scholars such as Katja Krebs and Laurence Raw in the field of adaptation studies have illuminated points of convergence and overlap between translation and adaptation. This article espouses and extends existing studies by explicating the redundancy of the borders constructed between translation and adaptation within the broader framework of Nigerian theatre and performance. Informed by a transdisciplinary approach adapted from multimodal social semiotics and literary studies, the author engages in analysis and close-readings of the play text and stage performance of Femi Osofisan’s Women of Owu (2004/2006) to investigate how translation transcends simple interlingual practice to encompass adaptations of the spatial, temporal and embodied aspects of societies and cultures.

Cross-disciplinary Notes for a Study of Rhythm

This context brings together three disciplines: Adaptation Studies, Translation Studies, and Semiotics. The question to be considered is the extent to which these disciplines are really ‘saying almost the same thing’. The present paper examines this question from three angles. First, I summarize some ideas concerning the nature of categories in general, and the function of categorization, from which I infer that we can regard a discipline as a kind of category. Second, I outline some examples of research which overlaps the boundaries between our three fields and thus questions the usefulness of holding such boundaries as permanent and universal. And third, I report a small investigation into rhythm, and in particular, the rhythm of a painting and its title, an investigation which merges such categorial boundaries. I present it in illustration of the view that conceptual categories and their boundaries are only tools, to be used or not, as the purpose requires.

Christine Calfoglou, Spiros Polymeris
The relationship between the visual and the verbal in conceptual art is a particularly fruitful instantiation of intersemiosis. In this article, we discuss conceptual artwork interpretation on the basis of this relationship and consider issues of temporal precedence, performativity, and illocutionary force in conjunction with conceptual art immateriality and self-referentiality. Invoking data from a museum-based project, we argue that the viewer-text possesses a key hermeneutic role in an interpretation process encompassing the two sign systems.

João Queiroz, Pedro Atã
Intersemiotic translation (IT) can be described as a cognitive artefact designed as a predictive, generative, and metasemiotic tool that distributes artistic creativity. Cognitive artefacts have a huge variety of forms and are manipulated in many different ways and domains. As a projective augmented intelligence technique, IT works as a predictive tool, anticipating new, and surprising patterns of semiotic events and processes, keeping under control the emergence of new patterns. At the same time, it works as a generative model, providing new, unexpected, surprising data in the target-system,​​ and affording competing results​ ​which allow the system to generate candidate instances. As a metasemiotic tool, IT creates a metalevel semiotic process, a sign-action which stands for the action of a sign. It creates an ‘experimental laboratory’ for performing semiotic experiments. IT submits semiotic systems to unusual conditions and provides a scenario for observing the emergence of new and surprising semiotic behaviour as a result. We explore these ideas taking advantage of two examples of ITs to theatrical dance: (1) from one-point visual perspective to classical ballet and (2) from John Cage’s protocols of music indeterminacy to Merce Cunningham’s choreographic composition.
Tweet