On Pandering to a Western Readership:

Building a Network around Activist Translation

Translation is a crucial yet fraught activity. On the one hand, it can provide visibility and engagement to the otherwise obscured and disenfranchised. On the other hand, it is a process rife with potential pitfalls and dissatisfactions. Berman (1985), for example, distinguishes 13 distorting tendencies (such as clarifying, lengthening, ennoblement, and homogenization, among others) which, he argues, are inherent in all translations. Similarly, Venuti draws our attention to the “violence of translation” which, he claims, “resides in its very purpose and activity: the reconstruction of the foreign text in accordance with values, beliefs and representations that pre-exist it in the target language” (2010, 68). What is at stake in this process, according to Venuti, is a “wholesale domestication of the foreign text, often in highly self-conscious projects, where translation serves an imperialist appropriation of foreign cultures for domestic agendas” (2010, 68). When translating texts that could be perceived as (culturally or politically) controversial or unpalatable to a Western readership, how do translators balance the need to remain faithful to their source material while maintaining international interest or indeed commercial viability? This international workshop, consisting in archivists, ethnographers, journalists and translation specialists, will discuss this question in the aim of establishing the terms and parameters of a critical and overdue debate about the role of translation in political and social activism. 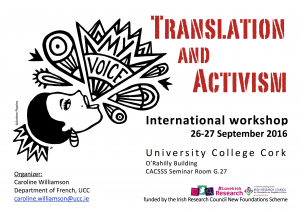 – Maja Haals Londorf (LSE/The Children’s Research Network), ‘Cultural and political brokerage: the use of a translator in ethnographic fieldwork with children in post-genocide Rwanda’

11:30-13:00: Claver Irakoze (Aegis Trust) and Paul Rukesha (Aegis Trust), ‘The Challenges of Translating Memory: Archiving the 1994 Genocide against the Tutsi’

14:30-15:30: Round Table: ‘Translation in Conflict: Understanding the Sub-Saharan Context’