Popular Culture and the Civic Imagination (2020) 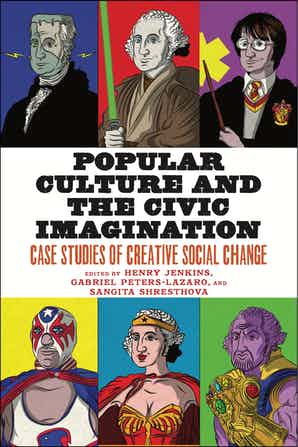 One cannot change the world unless one can imagine what a better world might look like. Civic imagination is the capacity to conceptualize alternatives to current cultural, social, political, or economic conditions; it also requires the ability to see oneself as a civic agent capable of making change, as a participant in a larger democratic culture. Popular Culture and the Civic Imagination represents a call for greater clarity about what we’re fighting for—not just what we’re fighting against.

Across more than thirty examples from social movements around the world, this casebook proposes “civic imagination” as a framework that can help us identify, support, and practice new kinds of communal participation. As the contributors demonstrate, young people, in particular, are turning to popular culture—from Beyoncé to Bollywood, from Smokey Bear to Hamilton, from comic books to VR—for the vernacular through which they can express their discontent with current conditions.

A young activist uses YouTube to speak back against J. K. Rowling in the voice of Cho Chang in order to challenge the superficial representation of Asian Americans in children’s literature. Murals in Los Angeles are employed to construct a mythic imagination of Chicano identity. Twitter users have turned to #BlackGirlMagic to highlight the black radical imagination and construct new visions of female empowerment. In each instance, activists demonstrate what happens when the creative energies of fans are infused with deep political commitment, mobilizing new visions of what a better democracy might look like.

Part I. How Do We Imagine a Better World?

2 The Hunger Games and the Dystopian Imagination (Lauren Levitt)

3 Spinning H. P. Lovecraft: A Villain or Hero of Our Times? (Michael Saler)

Part II. How Do We Imagine the Process of Change?

Part III. How Do We Imagine Ourselves as Civic Agents?

11 Black Girls Are from the Future: #BlackGirlMagic as an Extension of the Black Radical Imagination (Brooklyne Gipson)

12 “Dance to the Distortion”: The Queens of Pop vs. Donald Trump (Jocelyn Kelvin)

13 Changing the Future by Performing the Past: Budhan Theatre and Transformation of Youth Identities (Manisha Pathak-Shelat)

15 Reimagining the Arab Spring: From Limitation to Creativity (Yomna Elsayed and Sulafa Zidani)

Part IV. How Do We Forge Solidarity with Others with Different Experiences Than Our Own?

17 Training Activists to Be Fans: “The Moral Equivalent” of Pop Culture (Stephen Duncombe)

18 Tonight, in This Very Ring … Trump vs. the Media: Pro Wrestling as Articulation of Civic Imagination (Sam Ford)

20 For the Horde: Violent “Trolling” as a Preemptive Strike via #GamerGate and the #AltRight (joan miller)

22 Imagining Resistance to Trump through the Networked Branding of the National Park Service (Rachel E. Moran and Thomas J Billard)

Part V. How Do We Imagine Our Social Connections with a Larger Community?

23 Moving to a Bollywood Beat, “Born in the USA” Goes My Indian Heart? Exploring Possibility and Imagination through Hindi Film Dance (Sangita Shresthova)

24 “Our” Hamilton: Reimagining the Founders for a “Diverse America” (Henry Jenkins)

Part VI. How Do We Bring an Imaginative Dimension to Our Real-World Spaces and Places?

27 “Without My City, Where Is My Past?” (Ethan Zuckerman)